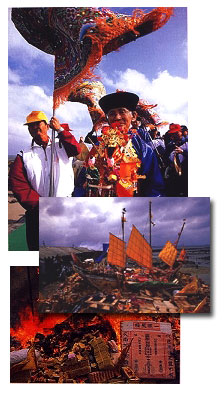 Temples to Wang Yeh (also known as Wen Wang—the God of Pestilence) are commonly found in Penghu and along the southwestern coast of Taiwan. Among the various sacrifices to Wen Wang are the holding of ceremonial processions and the making of ritual boats; the boats were originally allowed to float out to sea in hope that the God of Pestilence will be driven away with it, but nowadays they are burned in hopes that all will be peaceful in the local area. The "burning of Wang Yeh's boat" has always been one of the most famous and important temple festivals in Taiwan. While it originally signified the sending of disease out to sea, it has now evolved into a ceremony requesting peace and blessings. However, the lingering connection with the God of Pestilence has given this ceremony an air of mystery and solemnity.
The following ceremonial activities involving Wang Yeh are held at Hai Ling Temple: